DRAWING ON THE GRAPHIC ARTS

EMERGENCE, THE FLEETING AND THE SPECULATIVE

SM In conceiving the idea for this exhibition, we posed the question, ‘What is distinct about the use of drawing within the graphic arts?’ We speculated that drawing was increasingly mediated through new technology and used at specific places within a process, leading to a growth in hybrid forms. It was our intention to use the gallery as a testing space and to challenge ourselves with what initially felt like differing perspectives.

SM The architect Daniel Libeskind says ‘Drawing is the source of architecture’. (1) This is a compelling idea that something that starts on paper, and appears insignificant, can become monumental. Of course, we know this, but it reminds us of the potential within drawn marks.

JH I wonder how much of what looks solid around us in design, just came from a happy accident or a spilt ink pop?

TH That shift from paper to physicality feels increasingly digital and places for chance to emerge and areas of unknown maybe getting lost… Are we shrinking our potential to be creative by having so much available at the touch of a mouse or button?

MS No, I don’t think so. Maybe it’s a short cut, but I see it as an extension. There’s the speed of sketching and the speed of communication. We shouldn’t forget that the drivers for increased speed are mainly commercial ones.

TH The students I teach respond to drawing, and I use a white board and pen. The notion that they too can communicate through drawing, often for the first time in their education, develops quickly like any other language used frequently…

SM …and this is a short-hand drawing on the white board?

TH Yes, thumbnailing in particular is hard for new students to grasp. It comes from an anxiety that showing a lack of detail is inadequate, or a poor drawing. I’ve invited Samuel Alvarez to exhibit. He’s currently at the Barcelona Academy of Art and a previous student of mine. I use his old college sketchbooks to indicate the value of it… When I draw from nature, nothing stays the same. Drawing is a moment that has past. It can evolve over a minute, an hour, the things I’m drawing change and that means the story will always be unfinished. It’s not so much about a satisfaction of finishing a piece, but the satisfaction of exploring. I’d be hard-pressed to capture the accurate form of a small bird while it moves through bushes for instance.

JH Some work has the traces of its origin within in, where others leave it behind. When I think of the initial sketches that designers and animators make, and by the time it’s tightened up and put on film, that expressive gestural quality is lost. I like the fast ink work of Roman Muradov, and he’s someone that keeps that roughness in the final product… The quickness of sketching, responding to stimulus, and not overthinking lines, can often reveal a hidden essence…

MS …In drawing it’s important to be a good observer and that translates through eye-hand coordination. It explores your visual ability to capture what’s in front of you based around your ability to understand it. Howard Riley refers to it as an ‘intelligence of seeing’. (2).

SM Derrida suggests that during the act of drawing it is possible that the artist ‘has seen’ and ‘will see’, but ‘presently does not see’. (3)

TH We need more discipline or acceptance of marks when working digitally. It’s easy to manipulate work, airbrushing the faults as if they were photographs of models in glossy magazines. It only exacerbates an attitude of perfection where it isn’t required.

SM I want a digital tool that slowly blunts as you use it, and a digital sharpener.

TH I’m anxious to preserve what is core to drawing. Limitation is itself a valuable asset. We have always been creative when faced with limited tools and options. Ironically, it’s the limitation that extends our boundaries.

JH The ‘undo’ button and its memory of course has significantly changed rough working. We no longer have a trace, or indentation on the page, where a line once existed.

THE FAILURE OF WORDS AND THE COMPLEXITY OF IMAGES

TH When I joined the graphic arts course I was developing my drawing into visual communication, and that challenge made me think more about audience, and how I might draw for someone else.

MS For me, this suggests the simplification of drawing and a reframing of drawing in communication terms. Maybe we are looking for simplicity, readability, understanding… terms like outline, tracing, delineation still feel useful.

TH …I’d say ‘clarity’, not simplicity, as the ability to get across complex ideas remains its strength. Although society on the whole often feels like it preferences the word over the image, the potential for drawing to transcend written languages is what excites me…

SM Put simply, drawing does things in ways that other media can’t. The Chinese artist Chunmei Liu, describes the intertwined lines of her work as showing ‘a combined expression of the abstract, figurative and symbolic.’ It’s the interconnections in nature, the fusion of flower and human body that drive her response.

TH ‘Evolution’ is a word I use too. I like drawing from nature, something that organically changes in a way that is not ‘design’, but is a natural process within one’s self. ‘For the artist communication with nature remains the most essential condition. The artist is human; himself nature; part of nature within natural space’ (4). I am struck more deeply by terms and values held by others, who hold a similar affinity for nature.

SM 3D drawing software uses or borrows a number of terms such as ‘virtual illumination, shading, and assigning depth.’ (5). This feels more like an editing process. I wonder whether the simple act of stating or naming these terms, makes us hyper aware of them within a drawing, and that is a fundamental change of emphasis or priority when we work?

JH When we use digital tools, we draw in ways like cutting out with the pen tool. I’ll use the pen to cut around something I’ve scanned, a photograph or a piece of video, and that is drawing in the way that collage and scissors might be understood.

SM The architectural drawing by Carlton Bodkin (Practical Architects, Bristol) is less about a conceptual whole building, but grew from a central image and expanded within it through CAD and sketch to represent the constituent parts of detail and material. Its hybridity is what supports its communication…

TH Do you think your photography background changes the terminology and way you look at drawing?

SM Completely. You naturally adopt the language that you are trained in to describe what you do, and when that language can’t provide the words, you have to look outside or beyond. Nick Sousanis (6) talks about the contested spaces between discourses being fertile, and instead of these discourses duelling for supremacy, it could be reframed as a dance of partners working collaboratively. It’s quite a nice idea that you don’t have to describe a work in drawing terms or photography terms, and maybe a new descriptive language can emerge that is helpful to the graphic arts.

SM Are there subjects that drawing in the graphic arts feels inherently linked with? What about the cartoon or the subversive-ness of drawing? Graphic defacing… adding a Hitler moustache to a portrait, is the simplest of scribbles, but the harshest of criticism. The 2015 Charlie Hebdo murders remind us of that in a similar way. The rise in self-publishing, zines, fly-posting, stickers, tells us that particularly here in Bristol, the individual in the city can still find an audience outside the system.

TH …yes, street art is message, either through its subject or through its position on the street. There’s always going to be the negativity of territorial marking, but we must set that aside from what street art is, whether you like it or not.

JH Its subversive, it lends itself to resisting the system though its nature. It might be an illegal painting on a wall you don’t own, but it’s about whom cities are for. You can put a message right in front of people…they don’t have a choice. They are walking right past it. Street artists are learning from each other as there are similarities in style. It’s a sub-genre.

MS If you want to be political, yes, but you may want to make life more colourful. I do like a large mural. Haas & Hahn’s favela painting in Rio, Brazil is a good example. I would rather see a painted building than a site that is left derelict.

SM We return to Libeskind’s idea of architecture starting with drawing, and then come full circle, to architecture being the surface for drawing.

JH Colour can be political too.

SM Street art is outside the academy and that is why we keep looking over our shoulder at it… The things that attract students to street art, are the same things that make them interested in the graphic arts... Martyna you are showing some comics?

MS Yes, it started from a doodle, within the doodle, I created a narrative. It was one of those moments when you start sketching and everything falls into place. I didn’t stop until it was finished. It’s metaphorical, it’s floating, it’s not very difficult, it’s not deep. It’s easy, everything felt right, and everything made a story, and I was going to put it in a book.

SM What is it?

MS No! It’s a kind of abstract, short tale. It’s a lullaby, a rhyming lullaby. It starts with the creation of a little silhouette, and little creatures dancing around her, asking who she is…

SM …and is it without words?

MS No this one has words, and it’s in the form of a comic strip.

SM Maybe the reason you draw a comic around the idea of a lullaby is that there is no other place or form for that to exist? Without such human forms of expression and storytelling the graphic arts would be a lesser and colder place. 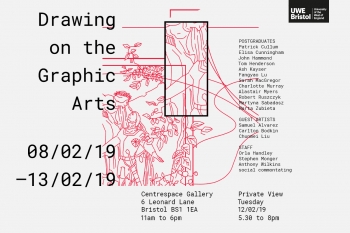